Texas in the winter of 2020 might be just a preview

I have been writing lately about natural gas, warning that it’s the next commodity story to go mainstream.

The coming winter may give the world a painful lesson in just how pervasive and vital gas has become for the economy.

Bloomberg today writes about the potential for a further spike in natural gas prices, which are already trading at record prices in Europe. 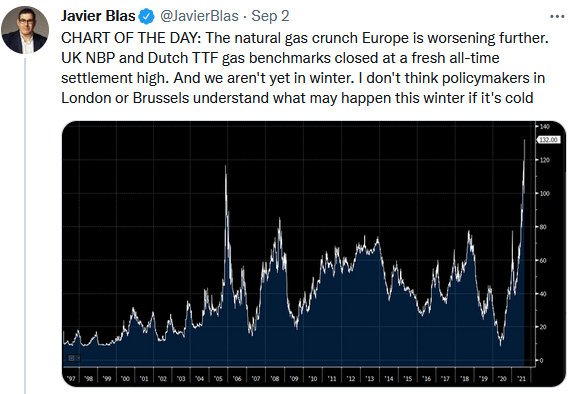 Natural gas is a highly-seasonal trade. If you look at US gas, you’ll see that every spike has come in the winter months. That’s because the main use of gas is still home heating. 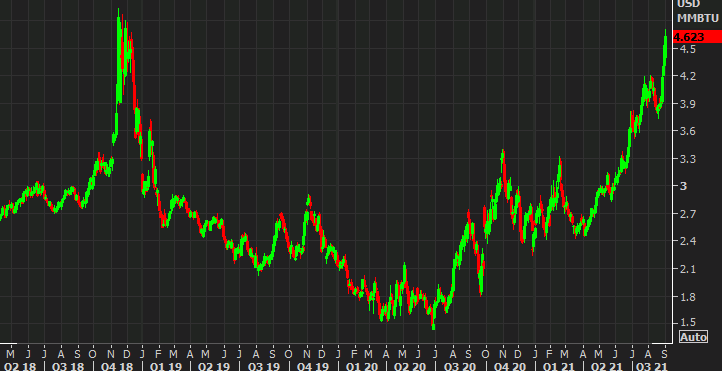 What’s different this time is that inventories are already tight and we’re not even close to the cold months.

It’s been the perfect storm of:

This winter is the reckoning and it will hit at a time when consumers are particularly agitated about inflation.

At this point, I don’t think there’s any hope for European and Asian gas prices falling. A further spike is close to a sure thing, especially since we learned this week that Russian inventories are low and they’re going to spend a few months rebuilding before they ramp up exports. Nord Stream 2 could help but I’m not optimistic.

In the US, inventories are about 14% below average. I’d argue that understates the shortfall because of higher export and power demand — the market appears to agree.

The x-factor now is weather. We saw last winter what could happen in Texas as prices briefly went parabolic as supply overshot demand. That kind of extreme move nationally is still highly unlikely but significantly higher prices are certainly possible; and I’d argue likely.

While the most-visible impact will be on consumers’ bills, it will quickly reverberate through industry via higher power costs and then boomerang back to the consumer again as those are passed through the supply chain in difficult-to-predict ways:

Surging utility bills have “sabotaged” the business of Mughal Steels in Pakistan, according to Chief Operating Officer Shakeel Ahmad.

“We consume the gas first and get a high bill later,” he said. “How can I go back to a client saying that I need to add extra cost to the steel that I sold you?”

In short, the one-pandemic price hikes that the Fed is trying to look through are facing a new front — and Powell will be hoping it’s not a cold front. In emerging markets, fuel is a life-and-death necessity and it could destabilize governments.

The good news in the longer-term is that the shale revolution is really about natural gas. At $4.60 it’s suddenly a viable business again but delevering will keep the rig count flat-ish. At $6, it’s another round of ‘drill baby, drill!‘.

AUDUSD finds the sellers near hourly MAs and swing area on the rebound
US institutions account for 85% of Bitcoin buying in ‘very positive sign’ — Matrixport
Yen Down, Nikkei Up, Yield Curve Distortion Improved
Gold eases off nine-month peak as U.S. dollar, yields gain
Gold steadies near 9-month peak with spotlight on US data