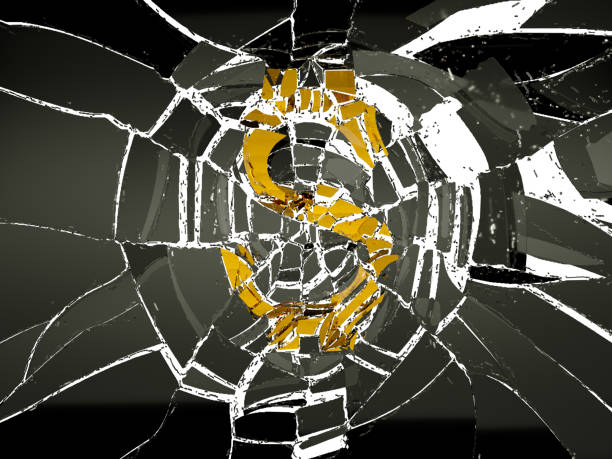 Dollar was under pressure most of the week and selling accelerated again after the big disappointment in employment data. The non-farm payroll report could show that job market recovery had made a “substantial setback” rather than “substantial further progress”. A tapering announcement from Fed in September is basically off the table. Overall development in US stocks were mixed with NASDAQ and S&P 500 making new record highs but DOW was stuck in range. 10-year yield also struggled in range but managed to close firmly above 1.3 handle.

Swiss France, Yen and Dollar were the worst performing ones for the week, on underlying risk-on sentiment. New Zealand and Australian Dollars were the winners. Overall development suggests that Dollar’s near term weakness is here to stay. But Dollar index will need to break through 91.78 key support level to solidify bearishness. That would correspond to firm break of 1.19 handle in EUR/USD. At the same time, Gold will also need to break through 1832 resistance to double confirm Dollar selling. As for going long against the greenback, Aussie could be a candidate as it continued to strengthen upside moment. But that would also be subject to reaction to RBA policy decision ahead.

Dollar index tumbled sharply last week, following broad based selloff in Dollar. 93.72 is confirmed to be a short term top, on bearish divergence condition in daily MACD. The main question is whether price actions from 89.20 are merely a three-wave consolidation that has completed at 93.72, after failing 38.2% retracement of 102.99 to 89.20 at 94.46. 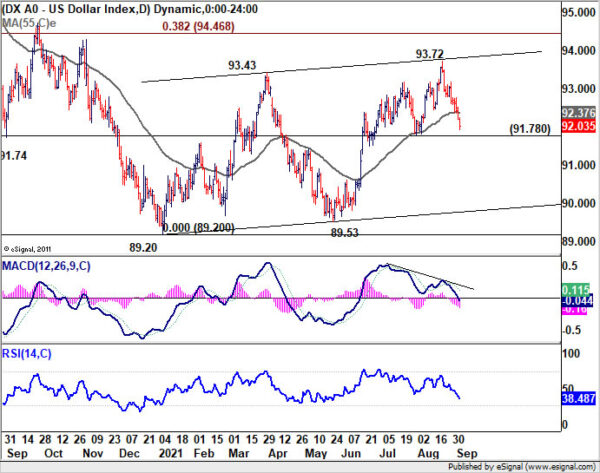 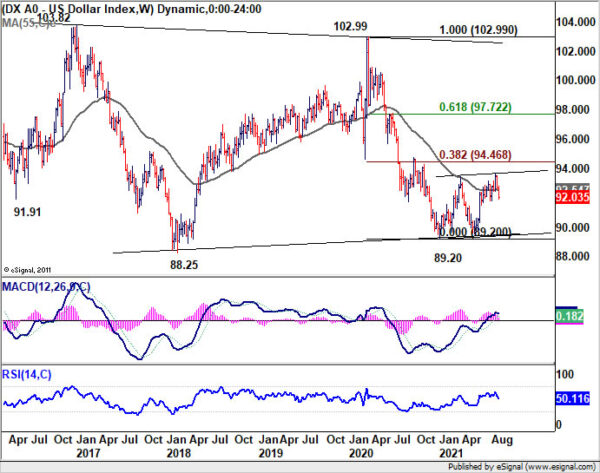 Gold’s rise from 1682.60 resumed last week and it’s now pressing 1832.47 resistance. Reactions to this level in the next few days is important in determining the medium term outlook. Sustained break of 1832.47 should at least confirm that fall form 1916.30 has completed at 1682.60 already.

More importantly, such development would also argue that whole consolidation pattern from 2074.84 has finished, after drawing support from 38.2% retracement of 1046.27 to 2074.84 at 1681.92 twice. Gold should then at least have a test on 1916.30. Firm break there will pave the way to retest 2074.84. If that happens it would double confirm Dollar index’s downside breakout mentioned above. 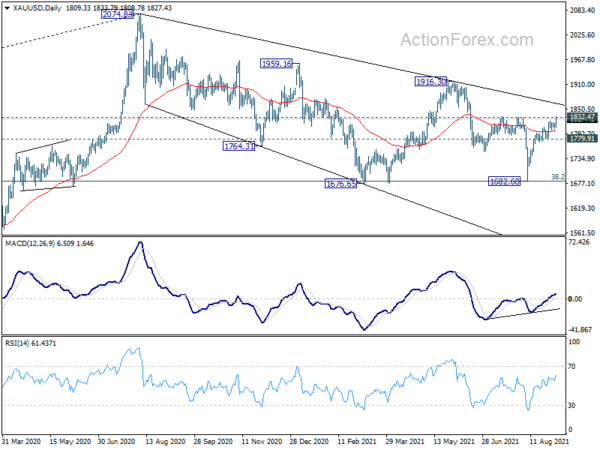 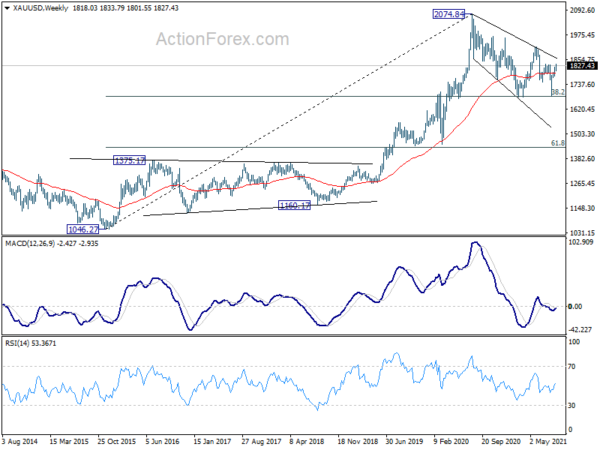 Silver also followed Gold higher last week and immediate focus is on 55 day EMA (now at 24.80). Sustained trading above there will raise the chance that corrective pattern from 30.07 has completed with three waves down to 22.36. Further rise should then be see back to 25.99 resistance next. Firm break there would likely clear the way for a retest on 28.73/30.07 resistance zone. 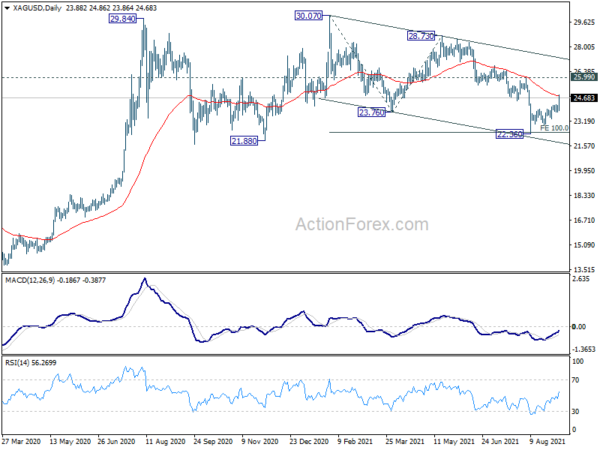 We’ve mentioned that Aussie could be turning around last week, and it did make some progress in strengthening upside momentum. AUD/USD’s break of 0.7425 resistance was a bullish sign, arguing that correction from 0.8006 has completed. AUD/JPY’s break of 81.56 resistance last week also argues that correction from 85.78 has completed at 77.88. Near term outlook will now be mildly bullish as long as 80.08 minor support holds. Rise from 77.88 should target a test on 85.78 high. 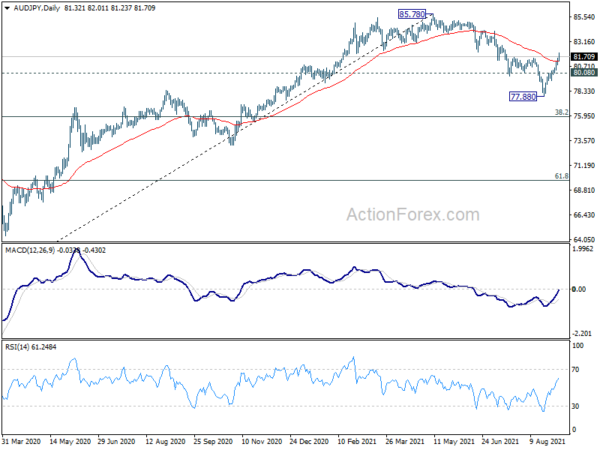 Nevertheless, Aussie’s fate would still very much depend on the reaction to RBA this week. In particular, EUR/AUD is now pressing 1.5898 support. Sustained break there will indicate that corrective rise from 1.5250 has already completed. Near term outlook will be turned bearish for retesting 1.5250 low. 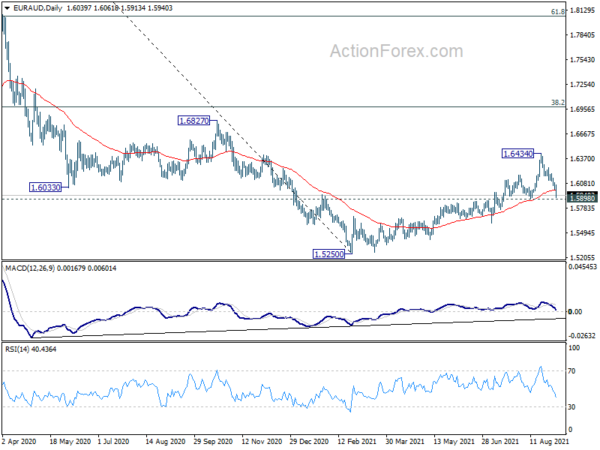 AUD/CAD’s strong break of 55 day EMA also raised the chance that decline from 0.9991 has finished at 0.9106 on bullish divergence condition in daily MACD. Further rise is now in favor to key near term resistance at 0.9417. Decisive break there will affirm this bullish case, and pave the way back to 0.9757/9991 resistance zone. 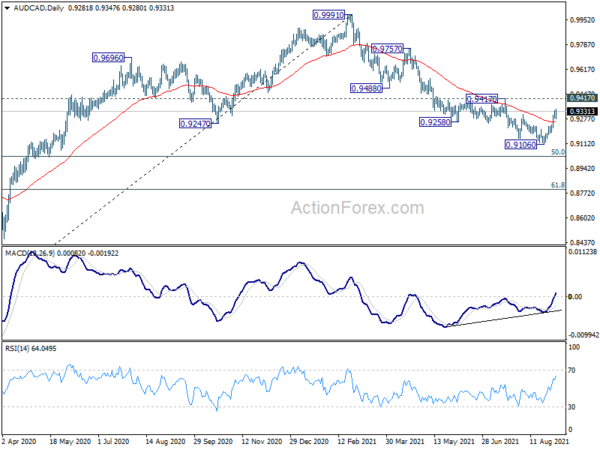 Firm break of the levels mentioned in EUR/AUD and AUD/CAD would give us more confidence that Aussie’s rally is there to stay into Q4.

EUR/USD’s rebound from 1.1663 extended higher last week. Initial bias remains on the upside this week with focus on 1.1907 resistance. Decisive break there will indicate that fall from 1.2265, as well as the consolidation pattern from 1.2348, have completed. Near term outlook will be turned bullish for 1.2265/2348 resistance zone. However, on the downside, rejection by 1.1907 followed by break of 1.1792 support will dampen the bullish case, and turn bias back to the downside for 1.1663 support instead. 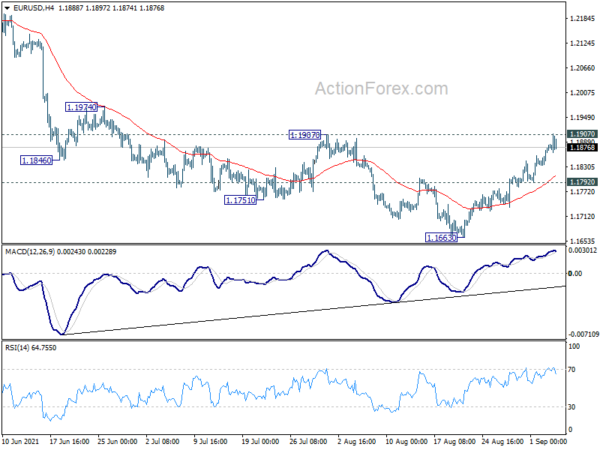 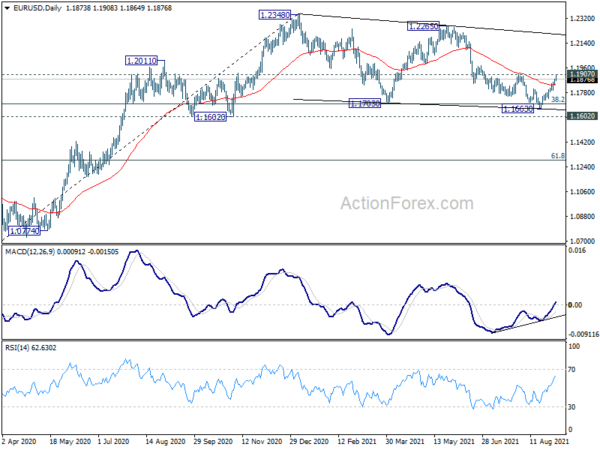 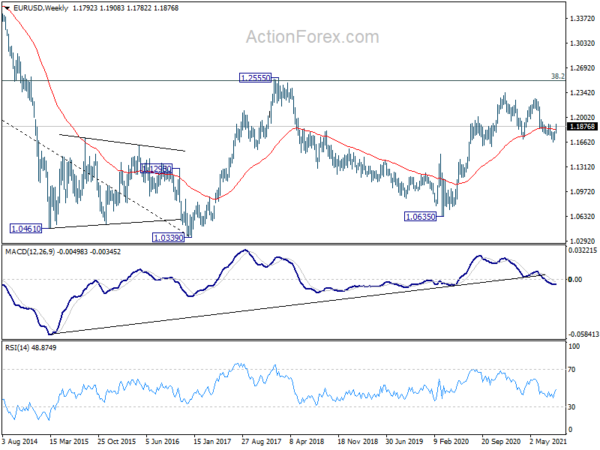 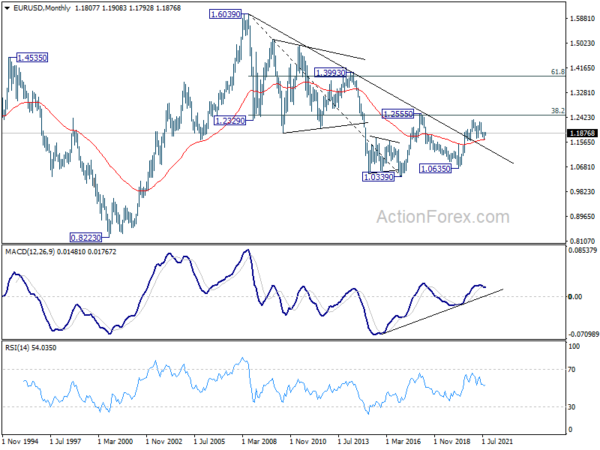