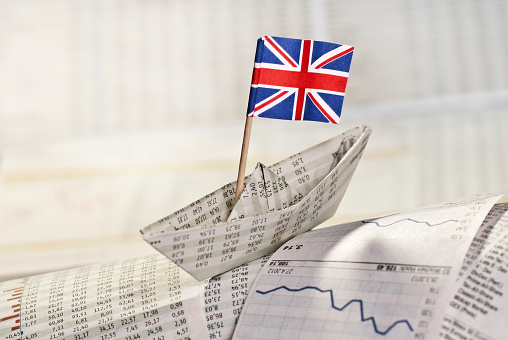 Overall, the forex markets are rather mixed as we’re heading towards the weekend. Euro is staying weak in European crosses, but selling slowed against Dollar and Yen. Meanwhile, commodity currencies are trading mildly higher, but remain the worst performers for the week. Dollar turned weaker against Swiss Franc and Yen, but there is no range breakout yet. Focuses will turn to UK GDP and Canada job data, and we’ll see if these data could trigger some sustainable moves.

Technically, we’re keep an eye on some Sterling pairs for European session today. EUR/GBP’s fall yesterday argues that rebound from 0.8448 has completed and that’s a sign of underlying strength of the Pound. GBP/USD displayed some resilience in rebounding quickly after dipping to 1.3725. GBP/JPY is also holding above 151.32 minor support in sideway consolidation. Break of 1.3890 resistance in GBP/USD and 152.27 resistance will GBP/JPY will resume the near term rebound in both pairs. That could be accompanied by steep fall in EUR/GBP.

BoC Macklem: Transition to reinvestment phase will be gradual, proceed in measured steps

BoC Governor Tiff Macklem said in a speech yesterday, “as the recovery progresses, we are moving closer to a time when continuing to add stimulus through QE will no longer be necessary.” But, “we are not there yet,” he added. “Timing is a monetary policy decision that will depend on economic developments.”

BoC is still adding stimulus with the CAD 2B per week QE purchases. Macklem said, “when we get to the reinvestment phase, we will adjust the level of our bond purchases to maintain the Bank’s total holdings of Government of Canada bonds roughly stable”. The transition to the reinvestment phase will be “gradual” and will “proceed in measured steps”. The timing of changes will be guided by the “evolving assessment of the outlook”.

Also, the change in purchase pace is “distinct” to the decision on raising interest rates. “It is reasonable to expect that when we reach the reinvestment phase, we will remain there for a period of time, at least until we raise the policy interest rate,” he said.

Fed Governor Michelle Bowman said yesterday, “even though some of the recent data may have been less strong than we expected, we are still looking at very robust economic growth.”

“If the data comes in as I expect that it will, it will likely be appropriate for us to begin the process of scaling back our asset purchases this year,” she added.

“It is important not to take too much signal from a single data point as we might have seen last week from the labor market,” Bowman said.

UK GDP, trade balance and production will be released in European session. Germany CPI final, France industrial output and Italy industrial output will be featured too. Later in the day, Canada job report will be a major focus while US will release PPI.

GBP/JPY is staying in tight range below 152.27 temporary top and intraday bias remains neutral first. On the upside, break of 152.27 will resume the rise from 149.16 to 153.42 resistance first. Decisive break there will argue that whole corrective pattern from 156.05 has completed, and bring retest of this high. On the downside, however, break of 151.32 minor support will turn bias back to the downside for 149.16 support instead. 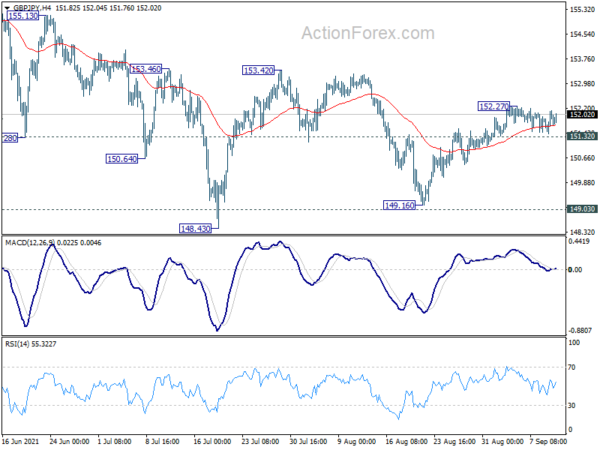 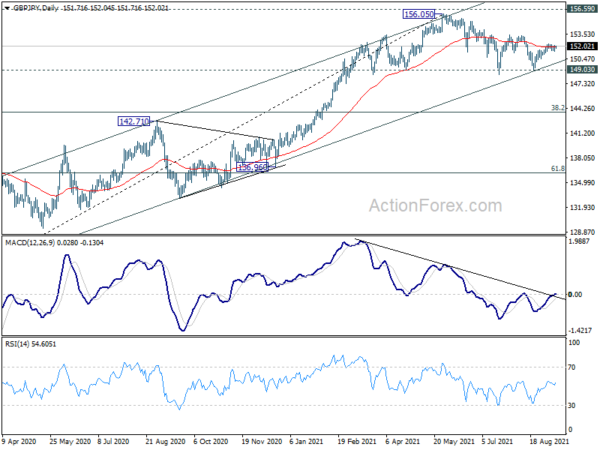