The US core PCE data for the month of August remain steady at 3.6%. That was the expected rate as well. Although inflation remains well above the 2% level, the expectations are that some of the gains are transitory and will come down over time. However, the risks still remain to the upside. Fed’s Mester said today that she expects inflation to remain above 2% next year and the year after. Feds Harker today also talked of higher inflation saying that he’s penciling in a significant risk of higher inflation, and that some business leaders are saying there could be years to resolve supply chains.

In other fundamental news today, the ISM manufacturing index came in at a strong 61.1% versus 59.6% but construction spending was unchanged versus 0.3% estimate for the month of August. The Michigan consumer sentiment came in hundred 72.8 versus 71.0 expect. So overall not a bad day as far as economic data goes.

In the markets, there was some support premarket after news that Merck was looking to fast track a Covid drug that would lower hospitalizations by 50% for those infected. That finally sent Merck shares higher but also the stocks like airlines and Disney also surged on hopes for a more normal economy going forward. Will that get people back to work?

Next week we get the US jobs report on Friday with expectations for 490K increase in jobs. That is down from higher levels for the recovery, but would be up from the 235K surprise reading last month. Despite the weaker report last month, the Fed chair Powell said this week that employment gains were on track and that is not necessary to seek blockbuster job gains going forward.

US stocks today moved higher across the board with the Dow industrial average leading the way thanks to Merck (+8.4%), Disney (+4.1%) and American Express (+3.8%). A look at the final numbers in the stock market shows:

In the forex market, the NZD is ending the day is the strongest of the major currencies. Next week, the Reserve Bank of New Zealand is expected to raise rates by 0.25% to 0.5%. Although the pair moved higher over the last two trading days, it still is lower on the week (it closed last week near the 0.7000 level and is trading at 0.6942 level currently but well off the low of 0.68569 reached at the start of trading on Thursday. 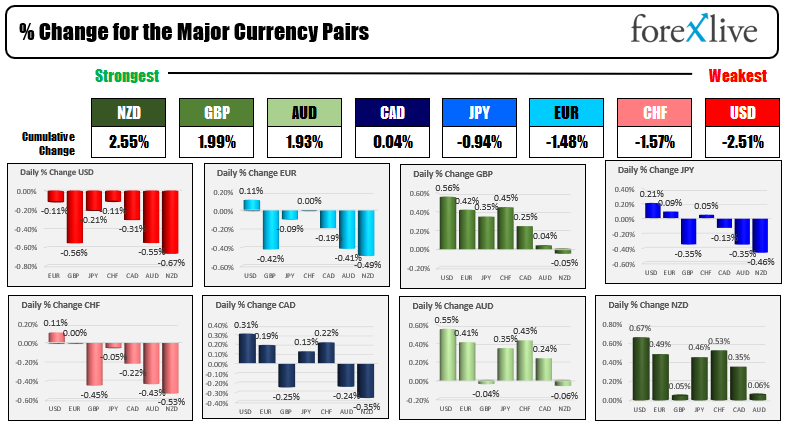 The USD is the weakest of the majors today falling by 0.67% verse the NZD, 0.56% versus the GBP and 0.55% verse the AUD.  The decline was helped by the lower US yields along with less “risk off flows” into the relative safety of the USD.

There were also some technical breaks which contributed to the dollar selling: