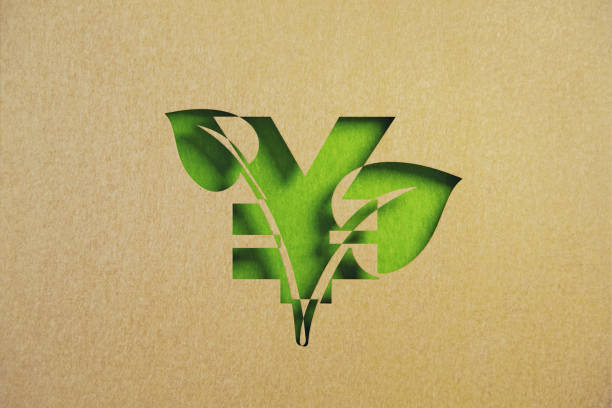 While some selling pressure is seen in Asian stocks, the forex markets are relatively steady. Canadian Dollar is currently the stronger one, followed by Yen. Sterling is the softer one, followed by Swiss France, Euro and Dollar. Overall risk sentiment will continue to drive the markets this week and hence we’ll have some attention on Yen crosses. RBA and and RBNZ could also drive some volatility in Aussie and Kiwi too.

Technically, Sterling is also worth a watch this week. One the other hand, it’s displaying some strength against Euro and Dollar. Break of 0.8499 support in EUR/GBP will argue that rebound from 0.8448 has completed at 0.8656. Also, break of 1.3608 resistance in GBP/USD will also indicate short term bottoming. On the other hand, sustained break of 149.03 key support in GBP/JPY will carry larger bearish implications.

CAD/JPY hesitates ahead of 88.44 resistance

While Hong Kong HSI and Nikkei, to a lesser extent, are trading deeply lower today, there is little reaction in the forex markets so far. But we’d still pay special attention to Yen crosses in case of a turn into risk-off mode in overall markets. In particular, we’d look at 149.03 support in GBP/JPY and 127.91 support in EUR/JPY to see if Yen is going strong.

On the other hand, we’d keep an eye on CAD/JPY to gauge if Yen’s selloff is back. CAD/JPY has lost some momentum ahead of 88.44 resistance so far, failing to confirm completion of the correction from 91.16. But at the same time, it’s still holding on 55 day EMA.

On the upside, decisive break of 88.44 resistance, with either help of WTI’s break of 77 handle or rally in stocks, would confirm near term bullishness in CAD/JPY, as well as be an early sign of rally in Yen crosses elsewhere. The stage would be set for a retest on 91.16 high. However, sustained trading below 55 day EMA (now at 87.28) will revive near term bearishness and bring retest of 84.65 low instead. 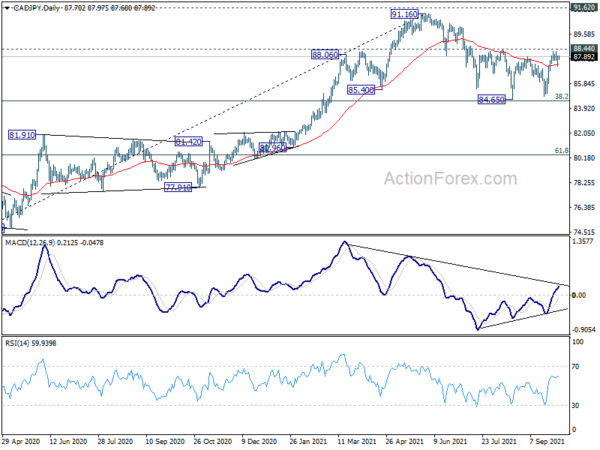 AUD/NZD to confirm in bullish reversal or not this week

AUD/NZD is a focus today with RBA and RBNZ featured. It started a rebound since mid September, even though market are expecting RBNZ to hike soon while RBA is still extending it’s QE. The reactions to both central banks this week would determine whether the cross has indeed been reversing the down trend.

On the upside, sustained break of 1.0538 resistance will firstly indicates that fall from 1.0944 has completed. Also, whole fall from 1.1042 might also have finished with three waves down to 1.0278 too. Near term outlook will be turned bullish for an eventual retest on 1.0944/1042 resistance zone. However, failure to break through 1.0538, followed by break of 1.0390 minor support, will bring retest of 1.0278 low, and retain medium term bearishness instead. 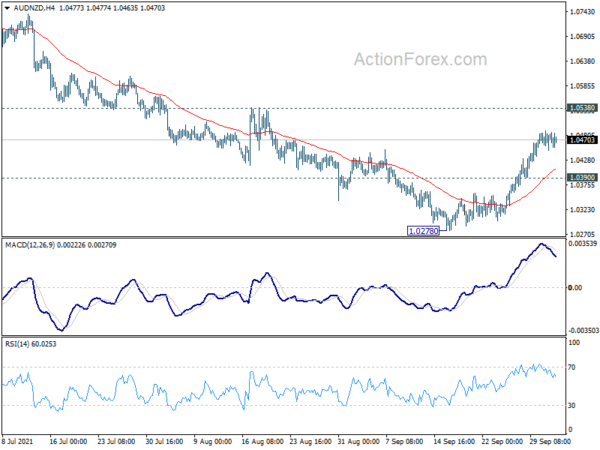 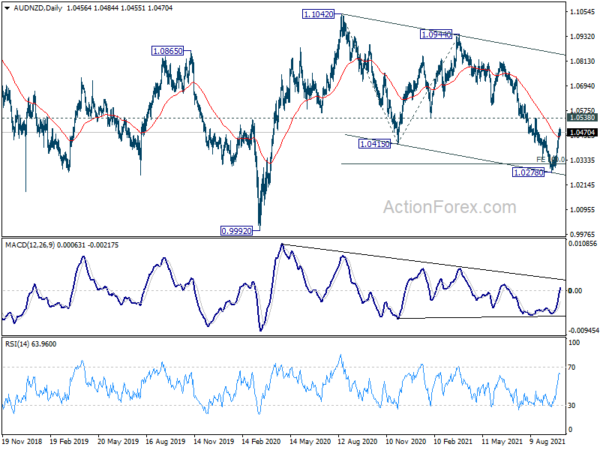 RBNZ to hike, RBA to hold, NFP to watch

RBNZ and RBA will meet this week. RBNZ is widely expected to finally raise OCR by 25 bps to 0.60%. The central bank was clear that the decision was delayed to avoid confusion on announcing it on the same date as lockdown extension in August. But overall outlook didn’t change it’s view on the policy path. There is some speculation that RBNZ could indeed hike by 50bps and the bullish impact on New Zealand Dollar could be huge if RBNZ does deliver this surprise. On the other hand, there is no scope for RBA to change policy after deciding to extend the asset purchase program till next February.

Intraday bias in EUR/CHF remains on the downside for the moment. Current fall from 1.0936 will target a test on 1.0694 low. Firm break there will resume whole decline from 1.1149. On the upside, above 1.0860 minor resistance will turn bias back to the upside for 1.0936 resistance instead. 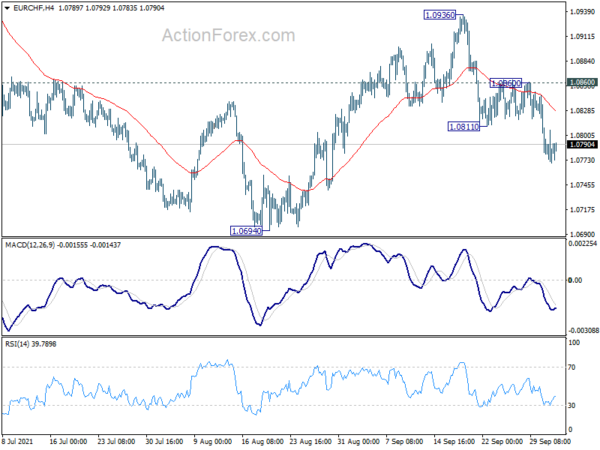 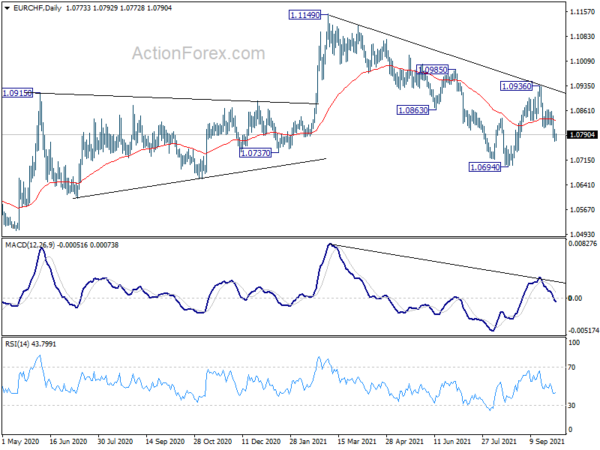 Yen Jumped as Fed Powell Knocked Down Dollar and Yields
Key inflation measure that the Fed follows rose 0.2% in October, less than expected
Elon Musk alleges SBF donated over $1B to Democrats: “Where did it go?”
USDJPY moves back to the downside and below its 200 day moving average
Sentiment Lifted by Fed Powell, Dollar Down While Stocks Up