Fed chair Powell speaking on a panel at a BIS conference, tilted his inflation fear little more in the direction of “inflation will last longer than expected” and “the Fed has the tools” to combat a higher inflation rate.

It just seemed that there was a little less “inflation will be transitory and will be coming back down in 2022”.  He has dug himself in that hole and may be forced to find a way to get out sooner rather than later

Now, it still  was a Friday choppy session, but the comments helped to push the JPY higher  (lower USDJPY and JPY crosses), and Nasdaq stocks lower (the Nasdaq fell -0.82% and is still below its all-time high despite the S&P and Dow reaching new highs this week.

Despite the inflation concerns, the Dow did close at new record high today (the first since August 16th), and the S&P closed marginally lower (-0.11%). However, the S&P index DID snap a 7-day win streak.

Next week will be KEY for US equities as all the BIG names will be out with their earnings (Facebook, Amazon, Apple, Microsoft, Alphabet all report).  You can never tell, but with indices near highs, supply constraints kicking in, inflation/costs higher, if there are surprises or talks of a ratcheting down of expectations,  and more concerns about the Fed moving rates sooner rather than later in the back of traders minds, it could make the market vulnerable to a sharp decline.  Just saying.

Below is a summary of the highs and lows and changes and closes for the Dow, S&P and Nasdaq today.

Overall in the forex, the JPY was the strongest of the majors, followed by the CHF (safe haven currencies). The GBP and NZD were the weakest.  PS The GBP saw a move down soon after the London close after the EU threatened to rip up Brexit if the UK rift on the Irish border deepens.  The USD was down and up and down in trading today. 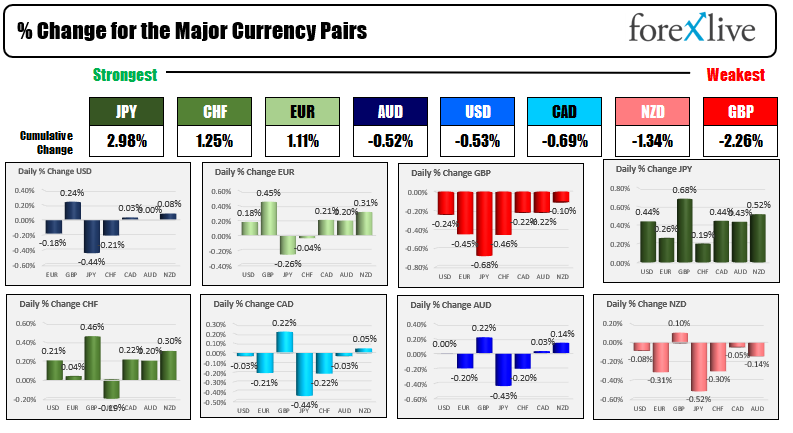 In other markets today:

Wishing you all a happy and healthy weekend. Thank you for your support.

AUDUSD rotates down to swing area support and ahead of a cluster of MAs
US stocks head into the last half-hour of trading for the week
Uzbekistan issues first crypto licenses to two local ‘crypto stores’
ForexLive Asia-Pacific FX news wrap: China reopening rumours swirling
UAE’s ADNOC to cut 5% of Dec crude volumes to term-buyers in Asia – sources